Trapped on an Island With Wolves, the Only Way Out for These Caribou Was Up Caribou were released after being flown to the Slate Islands in Lake Superior on Saturday.  Photo Credit: Ontario Ministry of Natural Resources and Forestry

Early on Saturday, amid blowing snow and temperatures at minus 13 Fahrenheit, three caribou were blindfolded, earplugged and bundled into a helicopter on an island in Lake Superior.

The animals, survivors of a herd that was decimated by wolves in recent years, were among nine animals relocated by the Ontario government last weekend in an attempt to save them from disappearing from around Lake Superior, where they once thrived. A team of pilots, veterinarians, research scientists and animal handlers moved eight cows and one bull from Michipicoten Island to the Slate Islands some 80 miles away, where the government hopes the animals will have a chance to repopulate.

After being herded by helicopter to an open area on Michipicoten Island, the caribou were captured with a gun net, restrained and sedated. Loaded on another helicopter, they took an hourlong ride to their new home. 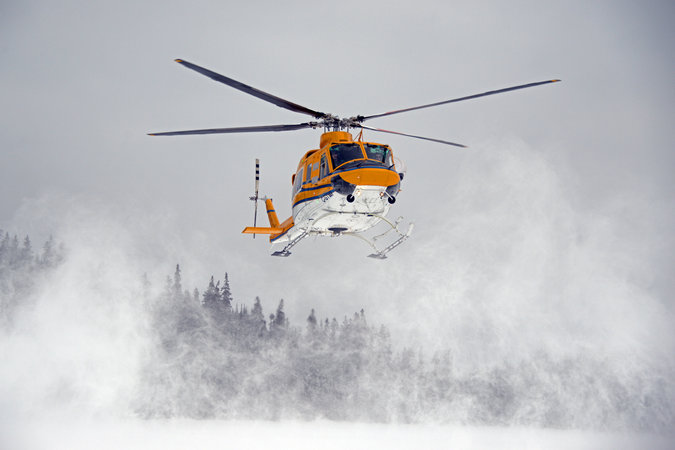 The flying conditions were challenging, said Arthur Rodgers, a government research scientist and biology lecturer at Lakehead University who helped lead the relocation. “It was a pretty hairy ride,” he said. “I almost wish I had been sedated for part of it.” But the caribou “transported very well,” Dr. Rodgers said.

Michipicoten Island’s caribou population has dropped from the hundreds to fewer than 40 animals since 2013, according to Ontario’s Ministry of Natural Resources and Forestry. In the winters from 2013 to 2015, packs of wolves crossed ice bridges from the mainland to the island, where they hunted caribou.

Historically, ice bridges would have formed almost every winter, giving both wolves and caribou freedom to move around, said Gordon Eason, a retired biologist who worked with the ministry for three decades. But because of global warming, he said, those bridges now form only occasionally, trapping the caribou on islands, together with their predators.

“It’s like being confined in a prison cell with someone who’s trying to murder you,” Mr. Eason said. 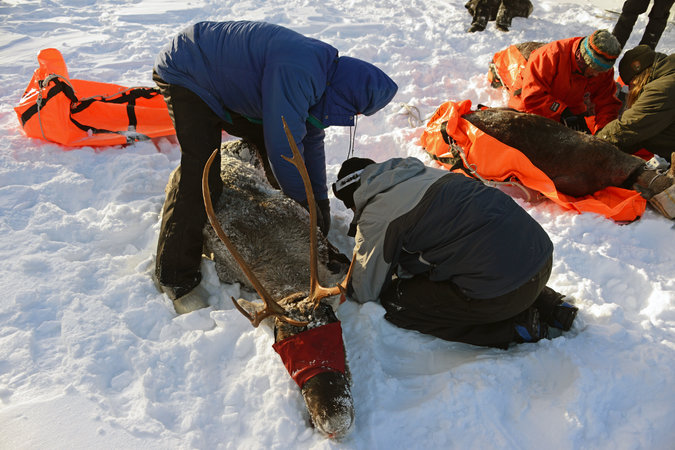 A team of pilots, veterinarians, research scientists and animal handlers moved eight cows and one bull over the weekend. The caribou were captured with a gun net, restrained and sedated before being transported. Photo Credit: Ontario Ministry of Natural Resources and Forestry

Caribou-transplant operations are not unheard-of on Lake Superior. In the early 1980s, after a lighthouse keeper noticed the tracks of a lone bull who had crossed an ice bridge to Michipicoten Island, Mr. Eason and his colleagues hauled seven females (and an extra male) to the island to join him, in the hopes of creating a new community.

It worked — at least for a few decades.

Dr. Rodgers and a colleague, Brent Patterson, a government research scientist and adjunct professor at Trent University in Ontario, said they were optimistic about the fate of Michipicoten Island’s caribou. But other scientists feared they would be killed by wolves in the next few weeks. Serge Couturier, a biologist who has been studying caribou for 34 years, said it was “likely” that wolves would “take the last few caribou before the end of the snow period.”

Mr. Eason, who led the original caribou relocation to Michipicoten Island, is among those calling for the ministry to do more to save Lake Superior’s caribou. “We have to become that agent of immigration instead of just natural immigration occurring,” he said.

“I guess that’s one of the costs of managing threatened species or endangered species,” he added. “You have to intervene in part of the cycle that isn’t functioning anymore.” 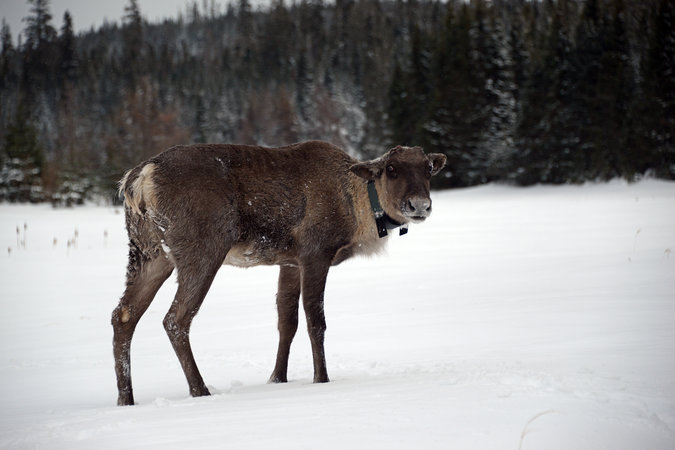 Some experts were concerned that wolves might find their way to the Slate Islands, too. Photo Credit: Ontario Ministry of Natural Resources and Forestry

The relocation comes after months of complaints from people who live nearby on Lake Superior, who have long voiced concerns about the island’s caribou and at one point even considered culling the wolves themselves.

“We wanted to keep the caribou on Michipicoten; it’s an incredible habitat, and they’ve thrived there,” said Leo Lepiano, the lands and resources coordinator for the Michipicoten First Nation, a group representing the native community. Now, some people are calling for the ministry to move the remaining Michipicoten caribou to other islands as “backup” populations.

“As it stands now, the survival of the Lake Superior caribou will be entirely dependent on the animals on the Slate Islands,” Mr. Lepiano, Mr. Eason and others wrote in a letter sent to the ministry on Monday. Mr. Lepiano said he was concerned another ice bridge could form from the mainland to the Slate Islands.

“It’s possible that wolves could make it over to the Slate Islands, and it would only take them a couple of weeks to eat through the caribou,” he said. “It’s kind of foolish to put all your eggs in one basket.”