Traci Lynn Martin has already traveled more than 3,494 miles on her surfski around the Great Lakes -- more than the distance between San Francisco and New York City. Photo: Scott Edwards/Just Around the Pointe

Traci was along the north shore of Lake Superior in July.  ESPN profiles her epic voyage and she is still paddling.

For Traci Lynn Martin, there is nothing more comforting than paddling in her 19-foot surfski, a vessel similar to a kayak. It's where her mind is most at ease and where she can forget the pain her body is so often in because of her rheumatoid arthritis.

Since early March, the registered nurse has paddled up to 37 miles a day -- sometimes for up to 10 hours -- in an attempt to break the Guinness World Record for most miles paddled in a surfski in one calendar year. The current record is held by Gerhard Moolman, who traveled 3,822 miles in 2002. Martin hopes to paddle at least 3,900 miles before Dec. 31. Her other goal: to be the first person to paddle all five Great Lakes in a non-calendar year, a feat that she'd finish next March, and one that would total 6,200 miles.

The former competitive kayak racer has traveled about 3,500 miles so far, more than the distance between San Francisco and New York City. She started her journey at the south end of Lake Huron and has since paddled three of the largest Great Lakes (Superior, Huron and Michigan) -- and she says she's the first person on record to do so in a calendar year.

"I want to inspire people with chronic illnesses to never stop doing the things that they love, and never give up on ... living their life," she said.

Martin started planning her journey two years ago, when a fellow kayaker told her that no one had successfully paddled all of the Great Lakes in one year. Her planning kicked into high gear after her mother passed away from pancreatic cancer in June 2015.

"I decided, I'm gonna do this. I'm not gonna wait. My mother had a lot of regrets about things she wanted to do and waiting, and she never got to do those things," she said,

"It can start out very calm and then, within 15 minutes, you're dealing with 5-foot waves out there." - Traci Lynn Martin, on the Great Lakes

But attempting to set a world record would require her to leave her job and her family in Lee's Summit, Missouri -- including two sons, Daniel and Noah, ages 15 and 12 -- for 10 months, a plan that wasn't exactly met with universal approval.

Her eldest daughter, Maranda Brooks, 25, was initially one of the detractors. "I was pretty straight 'no'. Like, 'You think that's safe? What about the boys?'" said Brooks, who has since become supportive of her mother. "It's still nerve-wracking because it is pretty dangerous, and I'm a worrywart."

"My first thought was, What's going to happen with the kids?" said her ex-husband, Alex Shepard, who moved into Martin's home to take care of their two youngest children when she left for the excursion. "My reason for supporting her is, simply, if parents aren't successful, then the children suffer. And I wanted to make sure my children get all the benefits and eschew the negatives of what could happen."

Their concerns are not unwarranted. Conditions on the lakes can change almost instantly, and paddlers run the risk of encountering inclement weather and hypothermia.

"It can start out very calm, and then, within 15 minutes, you're dealing with 5-foot waves out there," said Martin. On Oct. 27, a record-breaking 29-foot wave was recorded on Lake Superior. In late March, only a few weeks after departing, Martin had to be rescued twice by the Huron County Sheriff's Department. The first time, Martin blamed a momentary panic by one of the members of her support team, who called 911 when Martin's tracking equipment stopped working.

The second time, Martin had started her paddling at 7 a.m. with the goal of completing 35 miles on the lake. Her GPS tracker wasn't functioning properly, so she decided to rely on her boat's compass. Ten hours into her quest, she realized she was paddling in circles, amid low visibility and ice, as heavy winds likely blew her boat off-course. 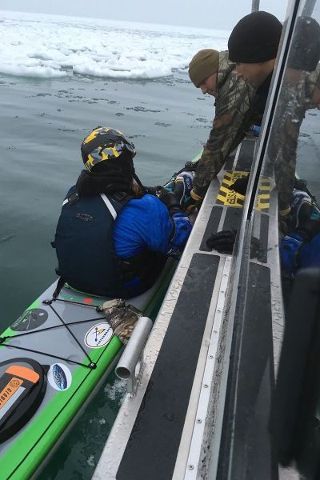 According to Huron County Sheriff Kelly Hanson, deputies trekked through two miles of ice and slush to bring Martin to shore. Afterward, Hanson threatened to take an axe to her vessel if she had to be rescued again.

"We were the difference between life and death for her that night," said Hanson. He added that the axe comment was not meant maliciously but rather as a deterrent for Martin. "It's a great lake by name, but it's taken 1,000-foot boats down into it."

The incident changed the way Martin thought about her endeavor and helped her gain a little more caution when the weather necessitates it. "I wish I could go back and change how that happened. I would not have gone out that day," she said.

To self-fund her trip, Martin said she cashed out $60,000 of her retirement fund to help continue paying her mortgage and for utilities while she is away. Leading up to her departure, she cut back drastically on her expenses: She started cutting her own hair and that of her sons. Gone was the budget for vacations, amusement parks and recreational activities like ice skating and bowling. When the door to her dryer fell off, she opted to buy magnets from Home Depot to help keep it on instead of replacing it.

"I've been financially devastated by this," she said. She saved enough to buy a used trailer for when she hit the road in February, the side of which is held together with duct tape. She and a volunteer driver opt to sleep in it rather than splurge on hotel rooms, often parking overnight in abandoned or shopping center parking lots, or camping in state campsites. Martin said she has only paid for five or six hotel rooms since March, when they "absolutely need to shower." She has no corporate sponsors, although several companies have given her equipment to use.

After her expedition, Martin will likely not go back to endurance kayak racing either, as the sport requires an athlete to raise her elbows and execute high strokes. Because of her rheumatoid arthritis and frequent rheumatoid "flares" -- or bouts of joint inflammation -- she hasn't been able to raise her elbows since July. She described the joints in her left hand as "destroyed" -- her right hand is getting that way, too.

She is heartened by other rheumatoid arthritis and chronic illness sufferers who send her text and Facebook messages. They even sometimes travel to greet her at various points of her journey, something her sons got to witness when they joined Martin for five weeks last summer as she circumnavigated Lake Michigan.

"I think that really helped them to understand what I'm doing and why I'm doing it," she said.

Martin is concerned that her condition will continue to be aggravated as colder temperatures set in. But when she sits in her boat, scrolling through messages and paddling her low and steady stroke, she mentally budgets the pain.

At some point, she'll reach for her go-to snack: a chocolate bar and a soda, another distraction from the pain. She said, "When I start feeling really bad, I'll just stop, float in the water and drink a Coke. It makes me feel better."

Even in the toughest moments, she still feels joy in what she has achieved -- and the goals she is still trying to accomplish. She sees a deeper purpose in it all, too, especially for her youngest children.

"I hope that what they get out of this is, no matter what obstacles you face, to never give up and to never stop trying," she said. "I'm trying to show them that by doing that. I'm trying to lead by example."