Early travel on Lake Superior to Carp River a challenge A mackinaw boat on Lake Superior is shown. (Photo courtesy of the Marquette Regional History Center)

As we saw last week, Lake Superior can show her true fury when the gales of November come early.

But we at least have satellites and meteorologists to warn us when to take shelter from a brewing storm. But the early pioneers in the area were not so lucky. They would often face Superior’s wrath with little warning.

Travel on Lake Superior in the mid 1840s was by canoe, mackinaw boat, and a few unreliable sailing and propeller boats. Sailing and propeller boats regularly went to the Copper Country, which was experiencing a large influx of men yearning to mine copper. As an unsettled area, the Carp River region (Marquette would be founded in 1849 as Worcester) was primarily accessible by canoe or mackinaw boat. A mackinaw boat, a cross between a large canoe and a sailboat, was the boat Philo Everett and other investors of the newly formed Jackson Mining Co. chose to travel in along the shores of Lake Superior in June 1845. The group would learn quickly the challenges of traveling on Superior in this smaller vessel.

The Jackson team began its travels from Jackson, Michigan to the Upper Peninsula to secure land in the Copper Country. After purchasing supplies in Detroit, the group boarded a steamer for Mackinac Island. At the island they transferred to a small sidewheel steamer to reach Sault Ste. Marie because the St. Mary’s River, which links Lake Huron and Lake Superior, prevented large steamers from sailing to the Sault due its series of rapids. (The Soo Locks would not open until 1855.) When they arrived at the rapids, they unloaded their supplies and moved them past the rapids by land. Upon reaching Sault Ste. Marie they were urged to stop at Carp River to examine large outcrops of ore near Teal Lake.

At the Sault the group met Samuel Ashman, a longtime employee of the American Fur Co., who educated them on the perils of traveling Lake Superior. He warned them to travel close to shore because in the event of a shipwreck the cold water could cause cramping and prevent them from swimming to safety. He recommended purchasing strong rope which was needed to pull a boat far onto shore so it would not be lost in a sudden storm. Finally, he advised hiring a skilled coaster (guide). 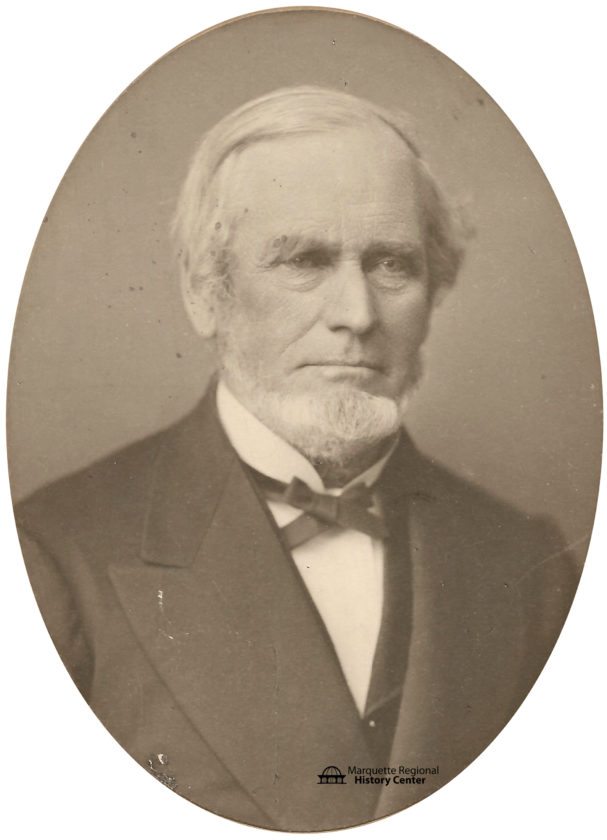 At their first stop, Whitefish Point, the men came to comprehend Ashman’s warnings and recommendations as Superior greeted them with a thunderous storm. Tents toppled down twice and they had to keep watch through the night to ensure the pounding waves did not carry away their boat.

The storm continued and prevented travel the next day. When the weather improved after a second night the group reached Grand Marais. High winds would again keep them off the lake until the following day when they could resume their journey toward Pictured Rocks.

While passing Pictured Rocks, the coaster noticed a storm approaching from the rear which could cause their boat to crash at the base of the rocky cliffs. Knowing Chapel Beach was near, the guide urged them to continue in stormy seas to reach the beach. Cold and wet, the men pulled the boat 100 feet onto the shore and made camp.

When this storm subsided, the men were able to reach a trading post on the south shore of Grand Island. The men felt fortunate the post had log cabins for lodging. After a restful night they reached Carp River, where they beached their boat and ventured miles uphill to search for ore.

Writing to his brother upon his return to Jackson, Philo Everett was astounded by Lake Superior, writing, “We incurred much danger and hardship. The lake is one of the most boisterous in the world.” A large portion of the letter detailed his observations. Everett wrote, “I have seen it when our sails would not flop and in fifteen minutes blowing a gale and the seas in a few moments more running as high as a house; and that is what makes it so dangerous for small boats to navigate. There are many bays to cross and some places the rocks are perpendicular for many miles and no landing at all. If a small boat is caught here in one of those common, but severe, squalls it must be lost or ride out the gale.”

Although challenged by Superior, the group would not be frightened away. The next year they returned and became the first company to mine and construct a forge on the Marquette Iron Range.

Lake Superior would continue to amaze and humble our early settlers, just as it does today.