Forecasting fall foliage is far from a perfect science. But scientists with the Minnesota Department of Natural Resources have a few ways to prognosticate our leaf-peeping season. And this year the state's leaf canopies should be as vibrant as ever.

"Because we have had a great year full of adequate rain in most of the spots in the state, trees are going into the fall healthy, for the most part," and good health drives good color, said Val Cervenka, forest health program consultant for the DNR's forestry division who also serves as the agency's unofficial fall-color forecaster.

To make her predictions, Cervenka relies on the HydroClim report, a monthly newsletter from the DNR's State Climatology Office that describes weather conditions for the past month and shows maps of temperature and rainfall.

She'll look as far back as April to see how weather has been affecting various parts of the state. Temperature and moisture are key.

For example, she said, "If one location has been getting more moisture than another, then I can talk about if it's too dry what fall color might look like."

Since Cervenka's predictions are largely based on overall moisture across the state, she can't get very specific.

For example, she could say that the mild to moderate drought in Minnesota's northwestern corner could make for underwhelming colors. But she could not tell you what the leaves look like this weekend at Gooseberry Falls, near Two Harbors, on Minnesota's North Shore.

"You can't predict it for every place because there are so many microclimates that could look different," Cervenka said. "It really is just an estimate of the annual progression of leaves putting themselves to bed, basically."

"They're really reporting on those microclimates of the day to day color. Even when we're into fall color, a lot of rain can leach the color out," Cervenka said. "So [park workers] might be able to report on that whereas sitting here in St. Paul, I may not know that it rained down in Albert Lea last night, or whatever." 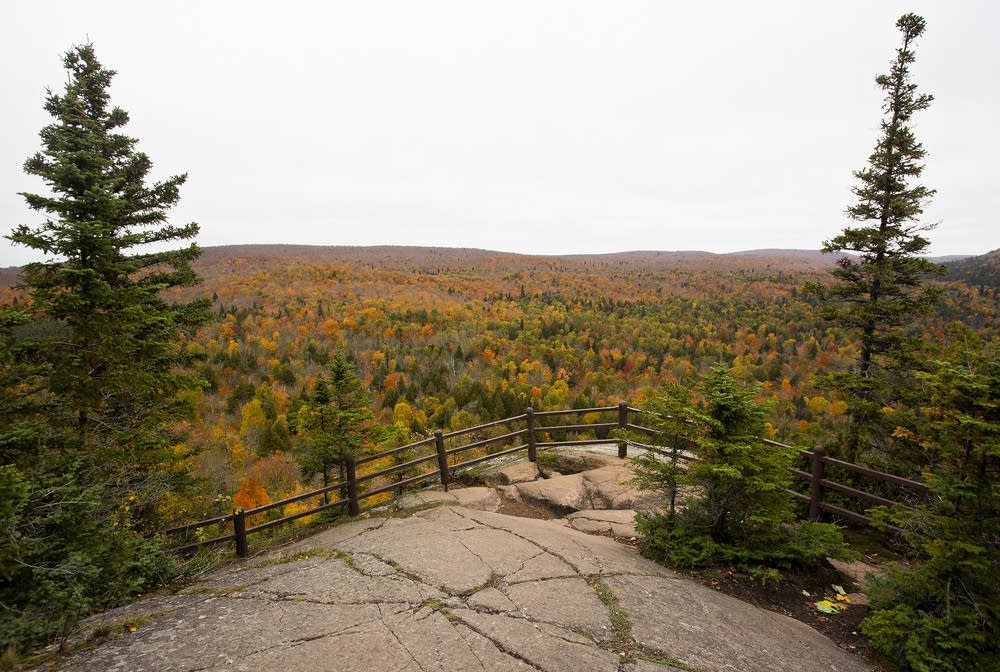 Trees turning, seen from one of the nine overlooks on Oberg Mountain near Tofte, Minn. Derek Montgomery for MPR News 2014

It's shaping up to be a good fall for leaf-peepers across the state, but Cervenka offered a few pointers to give your fall colors getaway an extra boost.

1) Head for the water. "Usually where there's water, there's usually some magnificence about that ... the reflection of the trees on the lake," Cervenka said. "That's what I would say: Go to a lake where you have a vista."

2) More tree species, better colors. "I really like to go where there's a variety of tree species because there you're going to get the variety of colors together," she said.

3) Elevation is your friend. "The places that have some elevation or topography, you generally have a variety of tree types," Cervenka said. Plus, the views are better. Think bluffs, river valleys and other vistas. Cervenka suggests Frontenac State Park in southeastern Minnesota.

4) For now, go north. That's where the color is. As of last Friday, nothing was past 50 percent color, Cervenka said. "We've still got a long way to go here in the next couple of weeks."

You don't need to grind all the way to the Canadian border. A stretch of Interstate 35 on the way to Duluth will do wonders, she added.

"As you go past Hinckley there's such a nice contrast between the yellows and the green of the conifers there along the freeway ... and once the tamaracks start to turn golden, it's just spectacular," she said. "And then you also have a lower level of beauty with the flowers and the purple big bluestem grasses. Just that drive up the main drag is beautiful."